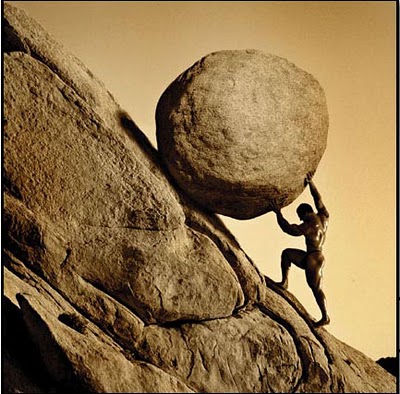 When I say “absurd” I don’t mean the common usage of the word which means unreasonable or irrational. I mean it more in the philosophical sense. I guess I should have called it “Science Is Absurdist” but that isn’t much of a title now is it?

NOTE TO SELF: Are you actually going to post this or is this just another unpublishable thought exercise? You have plenty of weird crap in your draft folder already…
REPLY TO SELF: Shut up, you!
WEIRD THIRD VOICE I HADN’T HEARD BEFORE: Stop fighting! This is tearing us apart!
OTHER NOTE TO SELF: Call psychiatrist in the morning.

Now, I feel that understanding absurdism creates a unique lens that we can use to understand the goals of science and how science ultimately works. Unfortunately for us, we have to explore nihilism and existentialism before we get to absurdism so we better get started!

In philosophy “The Absurd” is a particular conflict that humans constantly deal with. It is a conflict between the two following things:

In other words, humans, by nature, need to find meaning and value in their lives. There must be purpose. There must be an “Answer” and that answer cannot be “42”. But of course there is no “Answer”. Hence the age old question “What is the meaning of life?”

You can seek for inherent meaning all you want but will never find it. You are like Sisyphus rolling that boulder up a hill again and again only to have it roll all the way back to the bottom. Ultimately you lack any real purpose.

This leads us to…

Nihilism is the idea that life has no meaning. Essentially nothing matters. Let’s explore that for a minute. For one thing, you are going to die someday. (Not me, mind you. I found this cult that promises I will live forever so I’m good.) So who cares what you do with your life? Ultimately you’re going to end up in the same place no matter what you do so what does any of it matter?

Ah! Your memory will live on in others! Sure, but they will die too (except me – don’t forget my cult). And in another 4.5 billion or so years the Sun will expand beyond the orbit of the Earth completely consuming this rock. But don’t worry, Earth will long since cease to be habitable since the oceans and atmosphere will have boiled off long before that. So seriously, who gives a shit about your 6-point change on an outcome measure?! 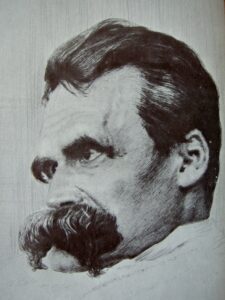 Ok. Nihilism can be a little bit of a downer. It’s no wonder Nietzsche had a mental breakdown while trying to protect a horse (long story). Let’s move on to…

So now that we are in the middle of an existential crisis, let’s try to get a hold of SOMETHING to give us meaning. What the existentialists brought us is a new way to consider “The Absurd”. It is actually liberating! Since life has no inherent meaning or purpose, you can make your life mean whatever you want it to mean.

This is known as “existence precedes essence” which basically says that the fact that you have consciousness allows you to determine your own meaning. In other words, no one can tell you who you are and why you exist – you must create your own identity, value, and purpose.

You be YOU, girl!

Ah. That’s better. Existentialism brought meaning back into humanity. All is right with the world. Well, not exactly. We need to take this one step further. We need to talk about…

Hold on a second Mr. Existentialist (or Ms. Existentialist – let’s not be sexist)! You can’t just make up an arbitrary meaning for your life! At least, not like that. Wut?

This gets to the idea known as “The Acceptance of the Absurd”. You must first fully accept that there is no meaning. Once you accept that, you must create your own arbitrary meaning and then pursue it – completely understanding that you will never attain it. That acceptance is key.

Albert Camus, arguably the founder of absurdism, put it best in the final line of his essay The Myth of Sisyphus:

“The struggle itself … is enough to fill a man’s heart. One must imagine Sisyphus happy.”

I really love that line. “One must imagine Sisyphus happy.” The act of rolling that stone, in all of its futility, is where Sisyphus finds meaning. Absurdism accepts the Absurd but is defiant of the Absurd. (Camus also had an interesting view on the philosophical value of sport.) 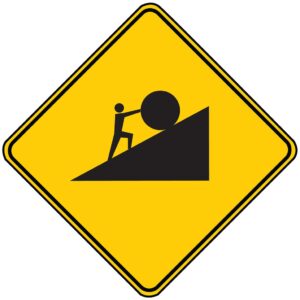 Based on all that you have read so far, this statement should now make a lot of sense to you:

Science will never give you the final Answer that you seek.

One of the core defining characteristics of science is an understanding that you can never prove something to be true. You just go along saying, “That prediction is not false.”

The point of science is to explore and to learn in spite of the futility. There is always uncertainty and that is okay. You must embrace that there will always be questions and you will never have the final Answer – but you will have a greater understanding through the process.

Where people go wrong is when they think they will find an overarching and definitive Answer. They try to use shortcuts of conjecture to “fly” to the endpoint entirely missing the point of the process of science: The methodical step-by-step exploration with no Answer expected.

Science is like going on a hike through the woods with no particular expectation. The woods are infinite with no end – ever. You have the freedom to go in any direction that you want, just be methodical. Even if you hit a dead-end, that’s okay. There is always more to see and explore. There is no destination, only more learning. The most important thing is to enjoy the hike.

The crazy Nietzsche image on this post is in the public domain acquired via Wikimedia Commons.