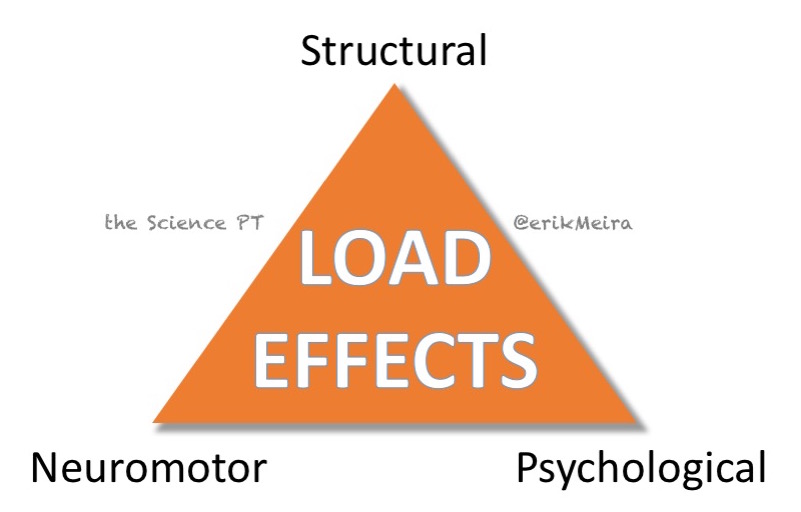 It has been quite a while since I created my “LOAD IT!!!” flowchart. The chart was just something that I slapped together one day without much thought, as an expression of frustration with physical therapists making things more complicated than they needed to be. I was sick and tired of hearing about all the tapes, massages, stretches, and “functional” training being prescribed to patients in the absence of any significant load application. So I made this: 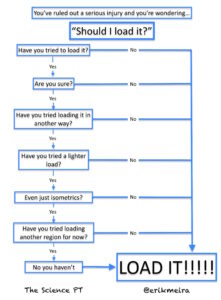 Since I released that flowchart, there have been several incidences whereupon meeting someone for the first time they remark, “Hey! Aren’t you the ‘Load It’ guy?!”

What does it mean to “Load It”?

As with damn near everything I’ve created, there have been some misunderstandings regarding the point of “Load It”. The most common thing that I hear is that the view is too narrow-minded – “It’s not just about load.” This misunderstanding seems to come from confusion regarding the effects of load.

First, when I say “load it” I am generally referring to applying stress to the organism. As physical therapists, the tool that we have in order to apply that stress is load in the form of external weight. Now the application of load requires a thoughtful approach which is why I like to say that we are in the business of load management.

One misconception about load application is a belief that it is about nothing more than building muscle. The thought here is that, since the application is in the form of resistive exercise, the effects being pursued must be strictly “in the tissue”. Although strength development is a good reason to apply load, that is not the only thing that happens.

The application of load has many effects on the organism as a whole. In this post I’m going to discuss three main categories: Structural, Neuromotor, and Psychological. That is not to say load doesn’t have other effects such as hormonal and cardiovascular as well. Keep in mind, all of these effects are layered and continuously interacting. Because of this, simplified explanations of effects (such as this post) will always be imperfect.

These are the effects people typically think of first when they think of what load does to the body. The most obvious are the muscle effects which can, in its simplest definition, be described as “strength”. But strength is a funny thing. The physical effects to the muscle refer to the absolute tissue strength and force production the muscle fibers could achieve in isolation (denervated). The capacity of that muscle to generate force.

In other words, if you took that muscle out of the human and wired it up on a machine for full contraction, how much force would it put out?

But there is more than just muscle adaptations. All the other structural tissues respond to load as well including tendons, ligaments, bones, etc. As a complete physical organism, the human body is designed to manipulate loads and adapt to interactions with load in an active way. This collectively falls under the umbrella of “tissue change”. These changes, however, do require a considerable amount of load. Way beyond what you can apply with your hands.

The problem is that many people get the misconception that these physical effects are all that happens to the human body when loaded. I find that this is true of both the supporters and detractors of “Load It”. Now here is the key point of this post:

The key phrase here is “complex process”. Many people think I’m talking about what is going on through high level “neuromuscular re-education” and “functional training”. I’m not. I have said before that I don’t believe these interventions achieve what people think they are achieving: Correction of movement.

What I am talking about is the coordinated recruitment of muscle against simple load to the system. This complex process is occurring even with the simplest of movements. For example the neural complexity required to perform a basic leg extension is almost beyond comprehension. I feel that this critical component of load adaptation is often overlooked and underestimated.

For some reason, the psychological effects of interacting against load seem to be rarely considered. I think that these are likely the largest effects that can be achieved by applying load to a patient. Let’s try to understand this through some examples…

If I have a current history of back pain, when I look at a heavy weight I will likely feel scared and fragile regardless of my strength. There is an equation in my head that says:

Consciously AND unconsciously I believe that there is a good chance that the application of load will cause injury to my perceived fragile structure. In other words, I have an expectation of harm. Pain, a protective device, stops me from engaging in this perceived threat.

But there is more than this going on. Now let’s say that I have symptoms consistent with patellar tendinopathy. Sure there are some structural changes going on there but what about my mental state? Similar to the previous example, there can be an expectation of harm.

I sit down on a leg extension machine that is loaded with the full weight stack – immovable for my weak-ass knee. This gives me an opportunity to perform some isometrics. Isometrics are really popular nowadays…

I start kicking into the pad and immediately there is pain. My automatic reaction is to obey that pain response and stop kicking immediately. The system believes that harm was imminent and by aborting the exertion, it believes the tendon was saved. Hooray! All expectations are preserved.

But now let’s throw caution to the wind and push through the pain. I begin pushing against the pad and immediately feel the pain again. Instead of obeying the pain response, I override it and keep kicking into the pad, pushing that line of tolerable pain. As I continue to push longer and harder my protective process ramps up:

Weirdly, I now have less pain. But was that due to structural change in the tendon? No. Not that quickly. So what else could be going on?

This phenomenon is known as “expectancy violation” and is a technique promoted for the treatment of phobias. Weirdly, it is most effective when the subject feels the least safe.

They have to really expect that their worst fear MUST happen when tested. So that means no preliminary education that would alter their expectation. It also means that you would NOT want to open a “window of opportunity” first. As a matter of fact, you would want to slam all windows shut before the exposure to raise the expectation as high as possible. That exposure should then be as heavy as tolerable.

Load is simple but the effects are not

When someone simply moves against a weight, there is a lot of complex stuff going on.

Let me be crystal clear – I do believe that our patients likely have deconditioned structures (muscles, tendons, etc) that need increased load tolerance, but I also believe there is much more going on. When load is applied to a patient all three types of effects are occurring at all times. Sometimes the effects are more structural. Sometimes they are more psychological. Sometimes it is something else. A skilled physical therapist considers all of these things when they “LOAD IT!!!!”

The featured image on this post is “Load Effects 3” by Erik Meira and is licensed under a Creative Commons Attribution-NoDerivatives 4.0 International License

“Should I Load It?” by Erik Meira and is licensed under a Creative Commons Attribution-NoDerivatives 4.0 International License