I work in sports medicine so I am familiar with depression 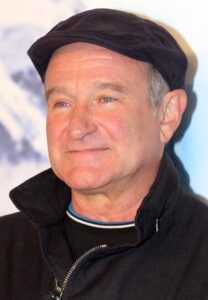 Since the recent news that Robin Williams has died of depression, everyone and their mother is writing a blogpost in response. This is no exception (I’m sure my mother will be writing a similar post on her very popular blog “RaisingAnEgomaniacalMonster.com”).

First, a quick word on Robin Williams. As I was becoming the person I am today there were several movies that had a profound effect on me and I still go back to them to watch again from time to time:

Simply put, he played characters that were aloof, weird, thoughtful, manic, funny, dismissed, and vulnerable. I personally identify with that very deeply and his portrayals taught me a lot about myself. And now, he has taught me more about depression…

Depression is a bitch. I am very familiar with it even though I am not one who suffers from it directly. The recent post by David Weigel is dead on. His list of the three ways depression hits him are so accurate that it gives me goosebumps:

1. You earned none of what you have. You’re a fraud. People are going to find out. Everything your critics have said about you, from the guy who lobbed dodgeballs at your head to the hate-mailer who hated your Iowa story, is completely right.

2. All that other stuff you feel, the negativity and the screw-ups? You definitely earned that, because you’re meant to fail. You’ve succeeded, and you still feel this way? Why, that’s proof that you won’t possibly feel better.

3. Nobody truly likes you. They can desert you at any moment. They’re succeeding, and you’re not.

One thing to point out here, depression is not about BEING miserable, it is BELIEVING you ARE miserable. That is a huge difference. Weirdly, suicide rates are HIGHER in the wealthy. In the book Think Like A Freak (great book on critical thinking by the way) they suggest that it has to do with the narrative differences. If you feel miserable and are poor and have nothing, you blame your situation and might, at worst, outwardly hate the world. But you have this excuse that things could change for you. You would be happy in different circumstances. When you “have everything” and feel miserable, you easily come to the wrong conclusion that you simply ARE miserable and will always be. That is a horrible and dangerous conclusion. This is the one situation where an overly internal locus of control can be disastrous.

Depression is huge in sports and it gets progressively worse as you approach the more elite. Depression can hide underneath the drive of an athlete for higher and higher “success”. Here is how their narrative works.

“You won a championship, huh? It was luck. Your teammates covered up for your mistakes. Maybe work a little harder next time.”

It also is related to addiction:

“Just one championship, huh? Good players have at least two…”

…or three, or four, and on and on. Never enough, always looking for the next thing to make it all ok. This heightened awareness of every flaw and a constant feeling of “not good enough” is often mistaken for drive and attention to detail. It’s not. Hall of Fame quarterback and four-time Super Bowl champion Terry Bradshaw has openly dealt with this.

There is a common misconception here: Depression does not “help” athletes and entertainers become successful. The drive and attention to detail made them successful, the depression lurks underneath. There’s a difference.

It can sneak up on you in the clinic. I recently was grabbed in the hallway by a trainer to take a quick look at an athlete as I was leaving for the day. I did a quickie 5 minute screen and told him, “I see nothing serious here, probably just a non-specific strain. Feel free to train through this as tolerated.” We exchanged a couple jokes and pleasantries (as I always do), told him to keep me posted, and he went on his way. I found out the next morning that he attempted suicide right after he saw me and was immediately admitted to an inpatient unit. Terrifying. I am happy to say that he is doing really well today. I am unhappy to say that I have other stories from my almost two decades of practice in this setting that didn’t all end well.

Never say to someone who suffers from depression to “Cheer up” or “Look on the bright side”. You drawing attention to their inability to do this “simple thing” makes them feel worse, not better. It is the fact that they still feel miserable when they damn well know that they have plenty of reasons to be happy that crushes them.

The best thing you can do for someone with depression is to help them recognize it and seek professional help. They need treatment, not a pep-talk.