Does Positive Mean What You Think It Means? 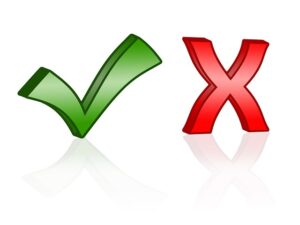 When chatting with others, we all understand what someone means when they say positive or negative. Positive usually falls in line with the idea of the “bright side” as in being an optimist and having a positive attitude. Negative on the other hand usually refers to the idea of the “dark side” as in being a pessimist and having a negative attitude.

Although these are examples of proper uses of these words, thinking about them this way can be confusing when trying to apply them in scientific discussions. For example, whenever I hear someone say something like, “I am a big believer in positive reinforcement,” I know that that person doesn’t know what they are talking about…

The phrase “positive reinforcement” is the example that I’m going to use to explain the meaning of positive versus negative. Reinforcement and it’s counterpart punishment refer to the concept of operant conditioning. Operant conditioning is the type of learning that occurs as the result of consequences as opposed to classical conditioning which pertains to learning through reflexes (think Pavlov’s drooling pooch). This relates to physical therapy since operant conditioning and graded exposure are treatments commonly encouraged for addressing chronic pain. As a side note, this has been shown to be moderately effective, but providing, reassurance, addressing the depression, and encouraging an internal locus of control has been shown to be more promising.

The term “positive”, at its core, refers to the words with or add whereas “negative” refers to the words without or remove. Think of special test results that are either positive or negative. They don’t refer to good and bad rather they refer to with and without. In operant conditioning, positive refers to a consequence that involves adding something. Negative refers to a consequence that involves removing something. Now, this leaves us with four options: Positive reinforcement, positive punishment, negative reinforcement, and negative punishment. Of course, when you misunderstand the terms positive and negative, you greatly misunderstand operant conditioning.

What about pain behavior? Do you reinforce pain behavior by adding “feel-good” treatments (positive reinforcement) and/or by taking away their challenging exercises (negative reinforcement)? Do you punish a patient who reports feeling better by making that patient do exercises at the other end of the clinic in relative isolation while you give all of your attention to a more “needy” patient?

Of course I’m not advocating berating your patients who have pain and forcing them to charge through excruciating exercises! Just try to be aware of the reinforcement and punishment, positive or negative, that might be at play. You may actually be encouraging the exact factors that are keeping your patient from progressing.