Inflation, BICEP2, and the Primordial B

On Twitter I retweeted a link that shows Assistant Professor Chao-Lin Kuo surprising Professor Andrei Linde with evidence that supports cosmic inflation theory. He needed to sit down after hearing the news. This recent scientific discovery has made finding evidence of the Higgs boson seem like a pile of puke! (I know that doesn’t make sense.) You may be hearing about giddy astrophysicists mentioning that this is a guaranteed Nobel Prize if it later gets corroborated by independent observations. So what exactly did they find and why is it such a big deal? As with the evidence regarding the Higgs, this is another example of how science works and how speculation means nothing without hard evidence.

A little history is in order. Back in the 1960s, American radio astronomers Arno Penzias and Robert Wilson at Bell Labs in Crawford Hill, New Jersey were working with a large horn antenna built to detect faint radio waves bouncing off of satellites. In order to detect these radio waves, they needed to account for all of the background interference from other sources of radiation. When they did this, they found this low buzz of microwave radiation at a wavelength of 7.35cm persisting in the receiver. It wasn’t coming from the Earth, Sun, or even anywhere in the Milky Way – it was coming from everywhere. It had to be the antenna itself so they proceeded to scrub the antenna of bird nests and droppings (“poop” to the layperson). The noise persisted which was frustrating to say the least. 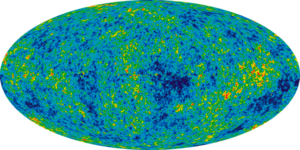 When Penzias was chatting with a friend from MIT about his problem, he learned of a new paper coming out that calculated that, if the Big Bang Theory was accurate, there should be a residual background radiation with a wavelength of 7.35cm from the immense blast of initial radiation. This is known as Cosmic Microwave Background (CMB) radiation and this is what Penzias and Wilson had accidentally found. This little accident won them the Nobel Prize for Physics in 1978 and was the first definitive evidence of The Big Bang.

Now there is a disconnect between the Big Bang and the observed Universe. One problem is that the Universe is in equilibrium. What does that mean? Well, when you look at the CMB, the Universe as a whole is the same temperature everywhere. The only way that is possible is if all of the “stuff” in the Universe could interact some way. Think of a glass of hot water mixed with cold water. Those molecules of water would interact back and forth with each other until they found a temperature equilibrium. The problem with equilibrium in the Universe is that it is too vast with too little time to interact. There is no way that a signal of any kind can move back and forth across a distance of 13.8 billion light years (size of Universe) in less than 13.8 billion years (age of Universe) in order to achieve equilibrium. Unless…

Remember that I said that it would inflate in an insanely small about of time? By insanely small, I mean that it happened between 10-36 seconds and 10-32 seconds after the Big Bang. In other words, it happen extremely early. As a human, you cannot even imagine a duration of time that small. The CMB was created at that time but was hindered during the first 380,000 years or so until atoms formed into neutral entities allowing the CMB to move freely. Since CMB is a type of radiation (like light, UV, infrared, gamma, etc) it gets altered by its environment. There was too much “interference noise” in the Universe back then. But what about gravity?

Gravity, as explained by Einstein’s general relativity, is a bending in the fabric of spacetime. If inflation occurred, the models predict that there should be a specific kind of gravity wave or “ripple in spacetime”. Those waves are not affected by their environment so they would stretch all the way back to the moment of inflation. In other words, they would be direct evidence.

But how do we measure that? Well, remember that I said that radiation gets altered by its environment? Well, we know that gravity can have an effect on radiation. In other words, it can bend light. This effect is known as B-mode polarization. Only gravity can do this kind of polarization. Of course there is a ton of other sources of gravity out there from stars, black holes, everything. But the gravity waves from inflation would have caused a background B-mode polarization at the magnitude of r=0.2 that would hide in the radiation underneath everything (known as the “primordial B-mode”). What kind of radiation hides underneath everything and stretches back to the time of inflation? CMB. If this primordial B-mode is not there, that particular kind of inflation described by Alan Guth and Andrei Linde did not happen. It is falsified and we can move on to other models.

So the hunt is on! First thing that happened is that scientists showed that they could detect B-mode polarization in general. Then they had to comb through the data to isolate any common B-mode polarization hiding in ALL of the CMB. In comes the second generation Background Imaging of Cosmic Extragalactic Polarization (BICEP2), a detector located at the south pole where it is both high (10,000 feet) and has clear cold skies. BICEP2 ran from 2010 to 2012 it collected CMB radiation on its supersensitive detector. Over the past 2 years the researchers have processed processed and analyzed the data and found not only that there is a B-mode polarization, but it has a magnitude r=0.2! As they state in their article, “Including both systematic and statistical uncertainties, the hypothesis of no B-mode polarization power from gravitational lensing is rejected at 97.5% confidence.” They rejected their null.

But wait! Astrophysicists are calling for restraint. This is one isolated study and needs independent corroboration. Now that we know how to detect this, the Planck spacecraft (an observatory that ESA launched into space in 2009 for just this purpose) should be revealing its data soon as well. If it and others later independently confirm the data, the BICEP2 gang should have themselves a Nobel Prize for being the first.